Getting a firsthand look at how video games are created – instead of playing them – will help open up the creativity of your kids’ minds. Enrolling them in a game design course in Calgary could be the start of them improving their brainpower!

At Calgary Game Developers Academy For Youths, we provide a safe and welcoming learning environment and social setting for youth in Calgary to empower their imaginative minds. Enrol your children today. Call us at (587) 393-0926 or send us an email to info@cgday.ca.

Manage Cookie Consent
To provide the best experiences, we use technologies like cookies to store and/or access device information. Consenting to these technologies will allow us to process data such as browsing behaviour or unique IDs on this site. Not consenting or withdrawing consent, may adversely affect certain features and functions.
Manage options Manage services Manage vendors Read more about these purposes
View preferences
{title} {title} {title} 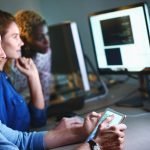